To share your memory on the wall of Stroud Camfield, sign in using one of the following options:

Provide comfort for the family of Stroud Camfield with a meaningful gesture of sympathy.

When S.J. was around, you knew you were going to laugh.
Whether he was railing on some rival of his beloved Florida State Seminoles, giving
other golfers guff about their game, smack talking ... Read More
STROUD JORDAN “S.J.” CAMFIELD

When S.J. was around, you knew you were going to laugh.
Whether he was railing on some rival of his beloved Florida State Seminoles, giving
other golfers guff about their game, smack talking on a basketball court, cracking jokes, mixing
drinks, sharing ‘70s rock videos, or making light of things that were bringing people down, he
always was the life of family gatherings, the guy everyone wanted to hang with after dinner.
Stroud Jordan “S.J.” Camfield was diagnosed with cancer late last year, and continued
working at Beverly Hills Cafe in Cooper City. He never complained.

“He was brilliant, mischievous, fun-loving, even as a little boy,” said his older sister,
Clarissa Thomasson. As a toddler, he tried to crawl through a missing stone in a wall and got
stuck by his diaper. In elementary school, he and a buddy took all the bricks out of a neighbor’s
pond to free the fish. Through his years at Coral Gables High, he drove the kiddie train at the old
Crandon Park Zoo. When his dad died, when he was still at Florida State, S.J. moved back to
Miami to help his mom and younger brother.

“He was the best brother I could ever ask for, always looking out for me and praising me
behind my back,” said Gray Camfield, who is three years younger. “He had a memory like an
elephant, and made people laugh at even the most serious topics or, oddly, laugh at themselves.
He never cried. Even in the throes of cancer pain, he said, ‘I got this.’”
For some reason, an inside joke, S.J. and Gray called each other “Fish.” “I’ll remember
him with a drink in hand calling, ‘Hey, Fish!’ loudly and happily across the room, while Gray
hollered, ‘Fish!’ back,” said their niece, Amie Thomasson. “Never knew what it meant, but it
showed such love, and joy in each others’ company. They looked after each other until the end.”
Jorge Fernandez, S.J.’s closest friend, also supported him and cared for him through good
and tough times.

S.J. is survived by sisters Clarissa Thomasson, of Venice, FL and Valerie Baumbach, of
Atlanta, GA; brother Gray Camfield of Melbourne, FL; six nieces and nephews and a dozen
great nieces and nephews. A service celebrating his life will be held at a later date.

To leave condolences or comments on the funeral home webpage, go to:  https://www.serenityfla.com/
Read Less

Receive notifications about information and event scheduling for Stroud

There are no events scheduled. You can still show your support by sending flowers directly to the family, or planting a memorial tree in memory of Stroud J. Camfield.
Plant a Tree

We encourage you to share your most beloved memories of Stroud here, so that the family and other loved ones can always see it. You can upload cherished photographs, or share your favorite stories, and can even comment on those shared by others.

Posted Apr 17, 2020 at 01:28pm
I am saddened to hear that the Fish is gone. I really thought that he "had this". Always positive til the end. Like his brother Gray said, "he was tougher that a $2.00 steak'. I am really gonna miss S. He was one of my best friends. And now I am flooded with thoughts of our youth when we were young and free. Playing football on Noc a Tee, hanging out watching sports, listening to classic rock, or playing Golf when we got a little older. They were truly the best of times! I'm really going to miss those talks we had more recently about those days along with discussing our local sports teams, the Noles vs the Canes rivalry, life, etc. Things that you never forget. You have fought the good fight my brother. Now its time to say goodbye and for you to finally be at peace. King Fish has left us. May you always seek calm and tranquil waters on your journey home.

RIP my friend.....until we meet again.

Posted Apr 15, 2020 at 09:02am
So sorry to hear my childhood friend is gone, so many memories. Football in Mr. Folks lot, basketball in the driveway, Gordon Solie and watching wrestling on TV, going to 7-11 for snacks and comic books and wrestling magazines, Led Zeppelin and Pink Floyd, just to name a few. And all of our old neighborhood friends, Magan, Farber, TR, Plager, Kaminski, Marquis, Erik, Kiskinis, Scornavaka. Center, Fine, Fiorilo... the list goes on and on. You were taken away from us way too soon. I'll miss you and see you when I get up there. 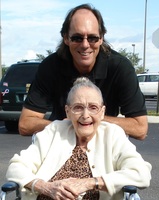