To share your memory on the wall of Marie Yhap, sign in using one of the following options:

Provide comfort for the family by sending flowers or planting a tree in memory of Marie Yhap.

Provide comfort for the family of Marie Yhap with a meaningful gesture of sympathy.

Born in Georgetown, British Guiana (now Guyana) on October 30, 1931, Marie learned early the value of thrift and hard work. At Bookers where they met, she was hired by future husband David Yhap, recently returned from England with a young daughter after decades away. Bridging a considerable age difference, the couple married and moved to nearby Trinidad, settling in Port of Spain.

Marie’s winning personality and easy rapport soon drew loyal customers to the B.G. Jewelry store and pawn shop on Frederick Street. A passion for horse racing soon emerged along with a social circle of offtrack betting enthusiasts at Savannah and Arima racetracks during the season.

In the late sixties, the family moved to North America, touching down in Miami and Toronto, before settling in Miami. The couple operated several small businesses, and Marie worked at Miami Seaquarium and later Hotel Sofitel where she was recognized by successive managers as an outstanding employee.

Marie moved to Miami Beach after David’s passing in 1988. With adult children settled in Canada and Ft. Lauderdale, she took up her other passion: travel. She visited Barreloche and Buenos Aires in Argentina, Jerusalem and Cairo in the Middle East, the UK, China, Europe and Pakistan. In the new century, she visited Spain, Paris, and Taiwan for her 80th birthday. Always on the go and relentlessly independent, Marie worked full-­‐time until her mid-­‐80’s, a feat that included daily commutes to and from Miami Airport.

She could and did make friends wherever she went, charming strangers with her generous kindness and vibrant, outgoing personality. She passed peacefully on the night of October 3 at Nspire -­‐Tamarac and is survived by daughters Cherrill in Ft. Lauderdale, Carla (Beverly) and Jennifer in Canada (Vancouver and Montréal respectively) as well as granddaughter Savannah (Vancouver).

A Catholic funeral was celebrated on October 9 by Marie’s cousin, Fr. Andrew Chan-­‐A-­‐Sue, pastor of St. Bartholomew in Miramar. Burial followed at Miami Memorial Park in Kendall where she rests beside her beloved husband, David.

If you wish to view Marie's Funeral Mass, please visit: Here is the link to the funeral mass:

To send flowers to the family or plant a tree in memory of Marie Yhap, please visit our Heartfelt Sympathies Store.
Read Less

Receive notifications about information and event scheduling for Marie 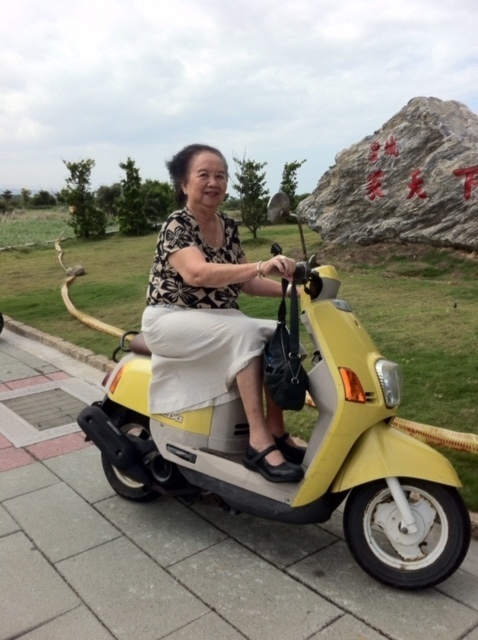 We encourage you to share any memorable photos or stories about Marie. All tributes placed on and purchased through this memorial website will remain on in perpetuity for generations.

We encourage you to share your most beloved memories of Marie here, so that the family and other loved ones can always see it. You can upload cherished photographs, or share your favorite stories, and can even comment on those shared by others.

Located Next to Our Lady Queen of Heaven Cemetery