To share your memory on the wall of Bill Gage, sign in using one of the following options:

Provide comfort for the family of Bill Gage with a meaningful gesture of sympathy.

Born as Billie Gage in Vienna, IL, on December 8, 1927, he was the son of the
late Daniel and Arista Gage. He grew up in a small farming community with his
four older brothers. He rode a horse to school, played the trombone and sang
every chance he had.

He served in the Army National Guard. He attended Johnson Bible College, where
he married his first wife, Esther Bernice Gage. He served as minister at Saybrook
Christian Church in Saybrook, Illinois. Later he was called to be a missionary in
Barbados, where he built seven churches, literally building one of them by his own
hands which still stands today.

He was an accomplished fisherman, snorkeler and gardener, which enabled him
to provide for his growing family.

Upon returning to the US, he first pastored Armington Illinois Christian Church
while working part time selling insurance for The Golden Rule Insurance
Company. He accepted chickens, guns, beef, etc., for premiums.
He then accepted an insurance position for State Farm in Miami and pastored part
time. He was very successful. He held the CLU (Chartered Life Underwriter)
credential and became one of the top 10% agents for State Farm nationwide. He
spent the remaining working years in Miami.

Always having a servant’s heart, Bill became very active in Lions Clubs
International. He held every position at club and district level, including the
distinctive position of Governor of Lions Florida District A. He was instrumental in
founding the South Florida Diabetes Youth Camp and held multiple positions at
The Lighthouse for the Blind. He collected and delivered eye glasses
internationally, raised funds for South Eastern Guide Dogs, and worked tirelessly
on many Lion projects. Among his many awards he was most proud of the Melvin
Jones Award and being an honorary Kentucky Colonel.

Concurrently to his Lions activities, he was Chaplain for the South Miami Police
Department, helped start a church in the Kendall area of Miami and was interim
pastor at University Christian for two years.

After retirement he lived in Houston, becoming involved with the church and the
school his grandchildren attended. He later moved to the Nashville area.
He loved to travel and did so extensively all over the world culminating in an
around the world trip. He loved to meet local people, eat strange exotic food, sing
with them and learn from them.

Bill had a passion for gardening. He was an incredible gardener with a superb
green thumb. He always had the healthiest garden and very productive fruit trees

from which he loved to share their bounty.
Bill loved to sing. There was never a time in his life that he wasn’t singing. He
sang solo, duet or quartet, and any chance he could sing, he did. In his later
years, he often entertained other residents at Brookdale and the Hearth, singing
popular songs, many hymns and choruses.

He was fearless in everything he did, “living life wide open”. He was known for his
quick wit and humor and his kind and compassionate spirit. He was a great
encourager, influencing everyone who knew him to go for their greatest dreams.
He was preceded in death by his loving wife of 39 years, M. Marie Elton Gage, by
son Stephen Collinson and by daughter Loa Glenn.

He took advantage and created many opportunities to live life to the fullest. Most
of all he will be remembered for how he was committed to the Word and a deep
respect and love of the Lord.

Receive notifications about information and event scheduling for Bill

There are no events scheduled. You can still show your support by sending flowers directly to the family, or planting a memorial tree in memory of Bill E. Gage.
Plant a Tree

We encourage you to share your most beloved memories of Bill here, so that the family and other loved ones can always see it. You can upload cherished photographs, or share your favorite stories, and can even comment on those shared by others.

Plant a Tree in Memory of Bill
Plant a tree 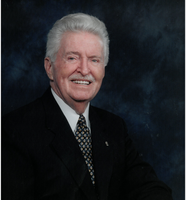